As the only professional vocal ensemble of women’s voices in Québec dedicated to the sacred music of the Middle Ages, Ensemble Scholastica has created a unique place for itself in the field of medieval music. To celebrate our 10th anniversary, we invited our founder, musicologist Pascale Duhamel, to put together a special program for us to perform. As part of her teaching activities, Duhamel directed the research project of Sylvain Margot, whose research focused on the music of medieval Haute-Marche. Because of the many upheavals and wars that have marked its history, this region of France has preserved very little of its medieval musical heritage. Margot’s research led him to the unexpected discovery of several manuscript fragments containing unpublished music for the liturgies of local saints. This discovery amounted to the exhumation of a long-lost regional culture. Medieval sacred music is an important part of our artistic legacy, embodying the profoundly human aspiration to give meaning to our existence. Ensemble Scholastica’s reconstructive work on this project—like all the work we have engaged in—reasserts the human and aesthetic value of historical sacred song. In spite of their religious context, these works are about “telling a good story,” which, along with music, is one of the most universal ways for people to connect to one another.

ATMA Classique ACD22755 January 2017 The work of musicologists and performers during the last few decades has significantly advanced the field of medieval music. There remains however a great deal to discover, and the question of authenticity continues to be a concern. Ensemble Scholastica seeks a new approach to these issues by exploring the medieval art of elaboration.

Today, a musical work is considered a complete composition, the intellectual property of its composer. The concept of ownership with regard to a musical (or any other) idea was however utterly foreign to medieval people. Music and text were adapted to the needs of the moment and performer. While you were not allowed to tamper with the existing liturgy, between the 10th and 12th centuries it became common practice to add to it, musically and/or textually. The development of polyphonic composition, at least until the 13th century, is also a product of this trajectory. Plainchant could now include elaborated passages of 2, 3 or even 4-voice polyphony. Still, not all compositions were notated, some were even improvised, and virtually none of these pre-14th century composers supplied their names for posterity in part because none could claim to have composed the final version of a piece. Of course polyphonic composition was not meant to be done any which way, but was subject to constantly evolving rules. The medieval student of music likely internalized these rules thoroughly and practiced them often. Few if any musicians today however have learned them to the point of being able to practice them in the same manner. In fact, most modern performances of medieval music are of known pieces in their surviving versions. It could be argued however that, rather than limiting ourselves to the extant repertoire, it is equally authentic to learn and apply the medieval art of elaboration. Ensemble Scholastica first began its experiments with the art of elaboration while preparing its "Birth of Polyphony" program in 2013. For a portion of this program (which we presented to an enthusiastic sold-out audience at the Festival Montréal Baroque/Médiéval), we followed the medieval rules of polyphony and composed several of our own polyphonic versions of surviving monophonic pieces. Since then, we've continued to learn other medieval elaboration techniques, and the result is an entire program of newly composed monophonic and polyphonic elaborations on medieval liturgical songs. Ultimately, our goal is to provide more insight into the world of medieval music by shaking up the normal rules of current historically-informed medieval music performance practice. On a more philosophical level, this project is also designed to invoke reflection with regard to our attitudes towards authorship, intellectual property, the space between performer and composer, and the relationship between historical and modern performance. CD booklet

A very, very beautiful disc. The sound is magnificent, inhabits the space, sublimely simple and terribly calming!
René Homier-Roy
Radio-Canada
[Presenting] the magnificent ARS ELABORATIO, which the superb women’s vocal ensemble SCHOLASTICA, under the leadership of Rebecca Bain, has just released under the ATMA label. As far as I know, the work of this ensemble is unique in Quebec. Reading through the booklet, one sees how the research done in preparation for the restoration of this repertoire is absolutely in keeping with the spirit of creativity of the period
Jean-Pierre Harel
Host, Radio Ville-Marie, Founder and Director, Les Concerts de la Chapelle
I just listened to your marvellous disc! HUGE bravo on this achievement!
Geneviève Soly
Founder and Director, Les Idées heureuses

Don’t miss the @cbcr2inconcert Disc of the Week, by @EnsScholastica: haunting medieval music, beautifully sung by this Montreal group 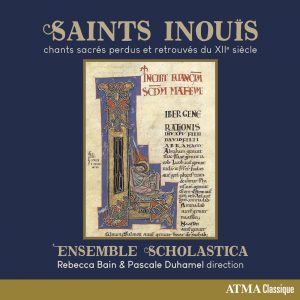 or the digital version: 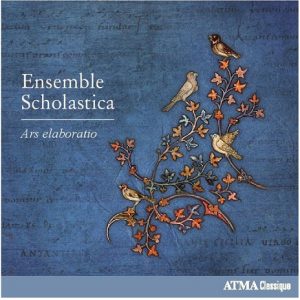